I have worked professionally as an actor and director since 1968.

My journey in theatre began when I joined an alternative theatre group called ‘The Christianshavn Group’. Two years later I entered the Fiolteatrets Acting School and graduated from there in 1974. 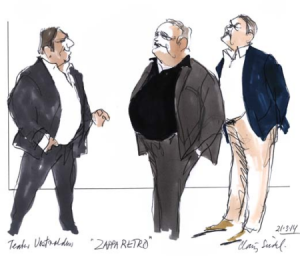 From 1983 until the present I have been working as a free-lance actor and director, and have performed and directed at innumerable Danish stages.
I have performed in around 150 theatrical productions, and around 75 films and TV series. In addition, I have had work in commercials; as well as teaching, role play (as a teaching medium) and as an audiobook narrator.

Last but not least, I have specialized in performing the unique narrative technique of the works of the Italian playwright and actor, Dario Fo.

50 years in the ’biz’ and the intrepidity for much more…

Reviews
"In the Kingdom of Denmark, Hans Henrik Clemensen is among the foremost leaders of the interpretation and performance of the works by Dario Fo, bringing a wealth of years of experience, perspective and technique to this work. "
Regarding "Mistero Buffo", Folkeskolen

★★★★★ "In a breathtaking and deeply moving narrative, Clemensen leads us through the laughter and the pain of a life; bringing forth a stirring performance where the pauses are as filled with meaning as the soft whispers; and the laughter as appalling as his cries and restless shifts of tempo - until finally he disappears behind a threadbare stage curtain. "
Regarding the play Scaramouche Jones "En klovns ansigt", from Gregers Dirckinck-Holmfeld på Gregers DH

★★★★★ "Hans Henrik Clemensen effectively builds up to a slimy, no-good charlatan who, when reaching his adult years, continued to be preoccupied with money, women and self-indulgence; and ends, of course, with a move to Switzerland. It does not take much to sway him from a nice guy to a ‘wise guy."
About "Zappa", Gregers Dirckinck-Holmfeld på Gregers DH